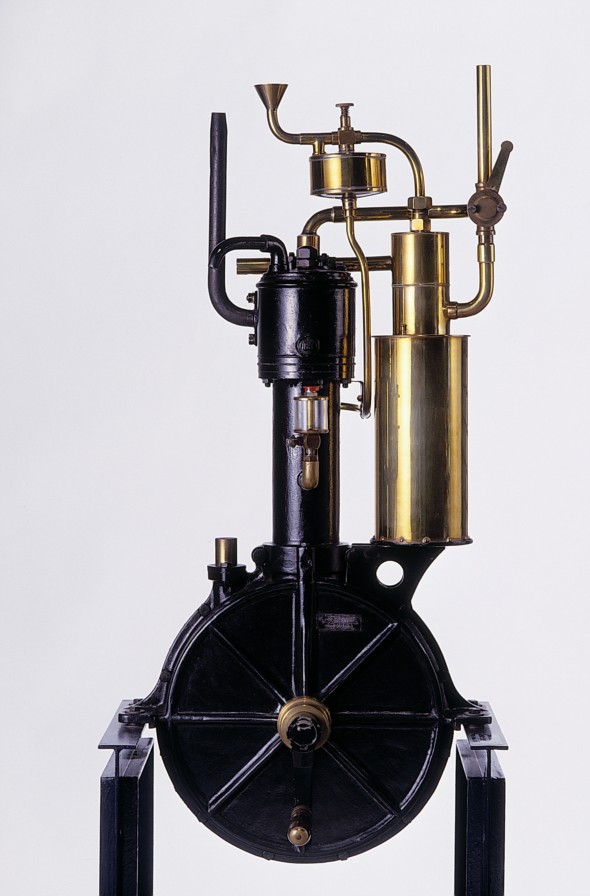 Stuttgart – The drive system is today the key to the modern automobile – just as it was in the pioneering days of motorisation. For this reason the engine with a single vertical cylinder – patented by Gottlieb Daimler on 3 April 1885 (German Patent DRP 34926) and nicknamed the “grandfather clock” for its distinctive appearance – has to be considered a key invention.

Since at the time this comparatively compact and powerful engine put the vision of a vehicle powered without the use of horses tantalisingly within reach. And so it proved: in 1885 the two engineers fitted the “grandfather clock” first to a two-wheeler and then in 1886 to a four-wheeled motor carriage and a boat.

The history of the “grandfather clock” engine goes back to the year 1882, when Gottlieb Daimler and Wilhelm Maybach began work in Cannstatt on a light-weight, high-speed, four-stroke engine. But the ignition represented a major challenge if they were to achieve higher engine speeds and thus a higher output compared with previous combustion engines. Maybach first concentrated on this problem, working through countless patent specifications before finally coming across the Englishman Watson’s uncontrolled hot-tube ignition system, which proved suitable for the high engine speeds they aspired to.

Once this hurdle had been overcome it was time to find the right principle of operation. Both men were already familiar with the concept of the four-stroke engine from their time working at Deutz. They chose this mode, knowing quite well that Otto’s four-stroke patent DRP 532 was still valid. Since Otto’s idea involved a layer-by-layer charging of the cylinder and slow combustion of the gas mixture, Daimler based his application for patent DRP 28022 among other things on the principles of explosive ignition and rapid combustion.

The experimental engine ran for the first time in 1883. With a displacement of roughly 100 cm³, it had an output of 0.18 kW at a sensational 600/min, significantly more than the usual 120/min for gas engines. Its key innovation was the hot-tube ignition system, which guaranteed a safe ignition and thereby made possible the desired increase in engine speed. The experimental engine was compact and light, and therefore suitable for use not just as a stationary engine, but also more importantly for mounting in vehicles. The essential design objectives had been met in this engine.

Creation of the “grandfather clock”

The improved version of the engine that followed saw it converted from a horizontal to a vertical position – the “grandfather clock”. This engine formed the basis for the patent registration DRP 34926. The “grandfather clock” had an enclosed crankcase, on which stood the air-cooled cylinder. The intake valve, known as a “snifting valve”, opened and closed automatically with the aid of vacuum pressure; the exhaust valve was operated by a curved groove control invented by Daimler, which also kept the revolutions in check.

The engine also featured for the first time the “floating” carburettor – better known today as the surface carburettor – developed by Maybach, which enabled the problem-free combustion of petrol. Although later abandoned, a piston crown valve that further assisted the charging was another feature of the engine. The single-cylinder engine weighed just 60 kilograms, had a displacement of 264 cm³ and developed an output of 0.37 kW at an engine speed of now 700/min – highly impressive figures for the day.

Daimler and Maybach initially installed the engine in a wooden two-wheeler, which served as the first test vehicle and simultaneously entered the history books as the world’s first motorcycle. Power was transmitted from the engine belt pulley via a drive belt to the rear wheels. Two speeds were possible – 6 or 12 km/h – depending on the belt pulley selected. In November that same year Gottlieb Daimler’s son Adolf had no problem completing the three-kilometre stretch from Cannstatt to Untertürkheim aboard this riding car – making it proof on wheels that this combustion engine could be used to power a road vehicle controlled by a human being.

During the course of 1886 an engine was mounted into a carriage frame – resulting in Daimler’s fist automobile and the world’s first four-wheeled motorised vehicle with petrol drive. From a displacement of 462 cm³, the improved and now air-cooled engine developed 0.81 kW at 650/min and had a maximum engine speed of 900/min. In addition, it was even lighter than the previous unit – weighing in at just 40 kilograms.

The carriage involved was a dark blue “Americain” with red trim, black leather seats and a “lantern with permit”, as was written in the delivery note from the Stuttgart carriage-builders Wimpf & Son dated summer 1886. The engine was mounted centrally ahead of the rear seat bench. In 1887 it was equipped with a water-cooled system.

In addition to the engine, what was radically new about this vehicle was the power transmission. Depending on the ratio selected, the engine’s belt pulley drove pulleys of varying sizes on a throughdrive countershaft. Via sprockets on either side, these then drove the toothed gears mounted on the rear wheels. Instead of a differential a friction clutch was fitted on either side of the throughdrive countershaft.

This vehicle, known as the “motor carriage”, attained a remarkable 16 kilometres per hour with its “grandfather clock” engine. And yet the excursions with the motor carriage were not publicly documented until the summer of 1888. What is interesting is that Daimler applied for a driving permit on 17 July 1888 for a “light four-seater chaise with a small engine”. And with that, another innovation had been born – the world’s first driving licence.

Daimler finally applied for a patent for his “machine to drive the propeller shaft of a ship by either gas or petroleum-powered engine” on 9 October 1886 and found suitable occasions subsequently on which to present his boats equipped with this drive system. The greatest interest in this new source of propulsion was shown in Hamburg, where large numbers of marine engines were ordered from Daimler. With that, the triumphal march of the high-speed engine for use on water was on its way – and it would not be long before it also conquered the land.