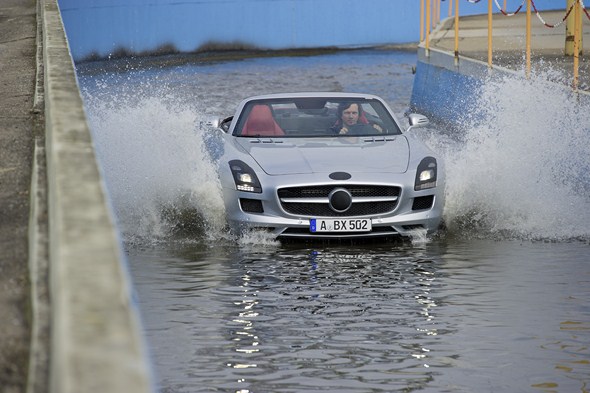 Revelation: stable even without gullwings

Affalterbach – After the gullwing version, the open-top variant is the second car to be independently developed by AMG. The Coupé and Roadster concepts were created in parallel – which brought decisive advantages during the development process. During this approx. 3-year period for the SLS AMG Roadster, the engineers devoted particular attention to the aspects of bodyshell rigidity, driving dynamics, the soft top and NVH.

Greater Stuttgart area, spring 2011: the new SLS AMG Roadsters are slightly disguised as they cover their test routes. Easily identified by those in the know, others only see these two-seaters with a fabric soft top as some prototype or other: there are no Mercedes stars or model designations to be seen, just black adhesive foil at the front, rear and along the sides. The proportions speak for themselves, however: a long bonnet, large wheels and a short rear end indicate that this is a sports car of breathtaking design. 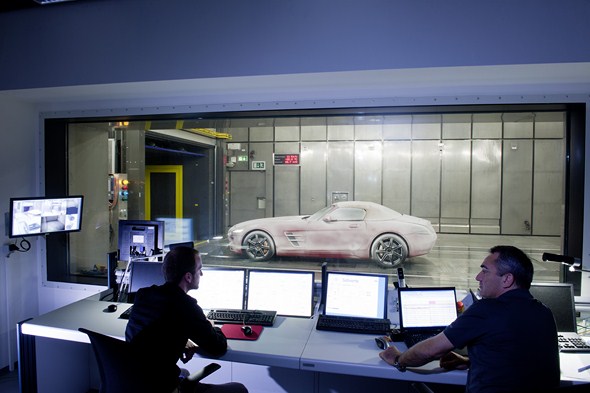 There are still several months to go before the world premiere at the International Automobile Show in Frankfurt/Main in September 2011. Enough time to verify the maturity of the new SLS AMG Roadster. The personnel responsible at AMG have already completed most of the work involved, as the Coupé and Roadster were created in parallel. 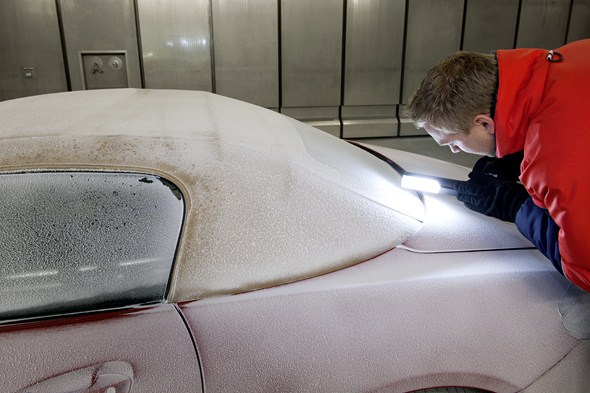 The development and testing of a new AMG high-performance car is based on the digital prototype (DPT). Extensive investigations help to achieve specific objectives. Whether these concern the bodyshell design, weight distribution, engine position, centre of gravity or axle design, or of course the handling dynamics, aerodynamics, ergonomics, crash behaviour and production process – the very latest simulation programmes allow the very realistic representation of a vehicle and all its characteristics. The digital prototype is therefore a complete, virtual automobile. 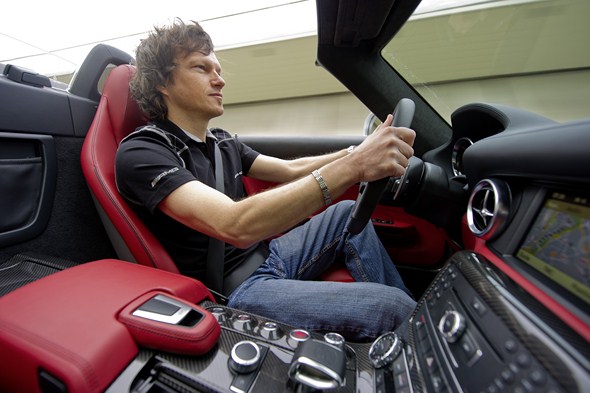 In the process AMG also uses the extensive know-how of colleagues at Mercedes-Benz: as in the case of the Coupé, networked development with selected Mercedes-Benz development departments at the Mercedes Technology Center (MTC) in Sindelfingen was intensified.

The latest simulation software and extensive test drives on all continents make the 420 kW (571 hp) Roadster fit for its market launch in autumn 2011. The focus of the specialists in Affalterbach was particularly on bodyshell rigidity, handling dynamics, the soft top and NVH (Noise, Vibration and Harshness). 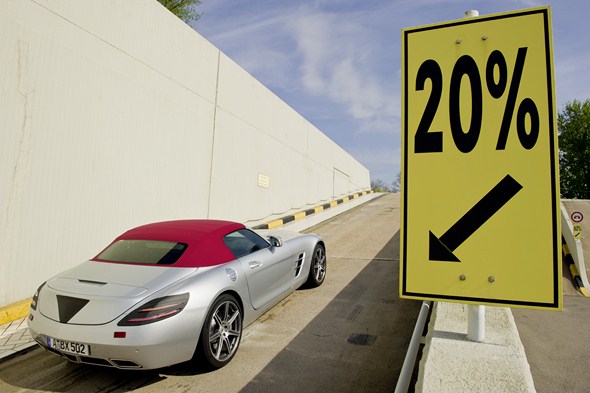 Naturally all these development aspects are closely linked, as Tobias Moers (44), head of overall development and member of the Executive Board at Mercedes-AMG, explains: “Without bodyshell rigidity there are no handling dynamics, and neither can the close fit of the soft top be guaranteed.” As the Roadster variant was already taken into consideration during the conceptual phase for the SLS AMG, the lightweight and extremely rigid aluminium spaceframe was specified at a correspondingly early stage. 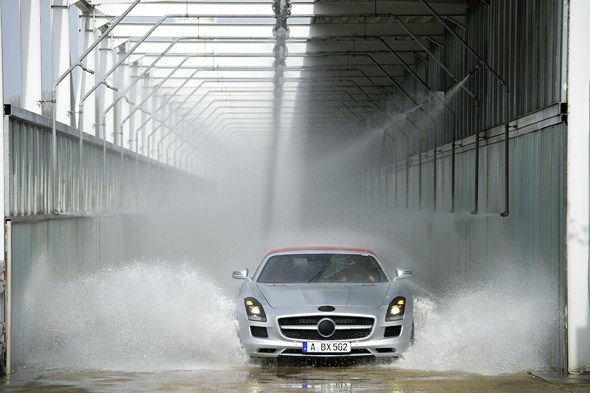 Owing to the omission of a fixed roof and gullwing doors, it was necessary to design the side sills more robustly. But not primarily to meet the legal requirements in the event of a crash – in principle the Roadster would also manage this with the side sills of the Coupé. Studies and test drives showed that the driving dynamics could be improved even further with this measure, therefore side sills with greater wall thicknesses and chambers were developed for the open-top SLS AMG. Tobias Moers: “The SLS AMG Roadster is a super-sportscar – just like the Coupé. It goes without saying that AMG is also determined to achieve superior driving dynamics with this open-top variant.”

In order to achieve handling dynamics identical to those of the Coupé, despite the lack of a fixed roof, the Roadster has two features designed to increase the rigidity of the bodyshell: the cross-member carrying the dashboard has additional supporting struts at the windscreen frame and at the centre tunnel, and a strut mounting stay between the soft top and the fuel tank makes the rear axle even more rigid. 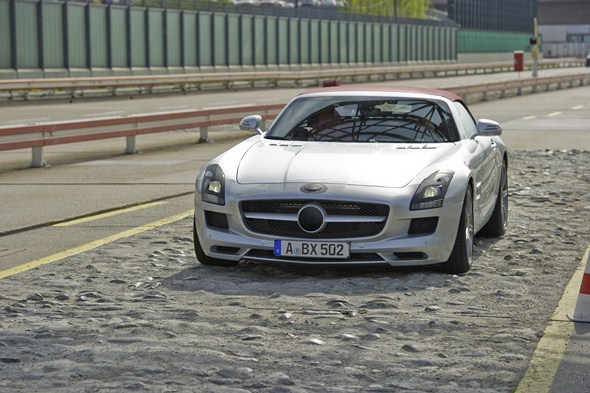 These features prevent unwanted vibrations from the start, and make the use of additional, weight-increasing vibration dampers such as those often employed by competitors unnecessary. As another important aspect, it is only if the bodyshell has the requisite rigidity that the soft top can be safely and reliably opened and closed electrohydraulically while on the move at up to 50 km/h. The side members of the front and rear modules in both SLS AMG models are identical. The bodyshell of the Roadster tips the scales at only 243 kilograms – which is comparable to the low, 241-kilogram weight of the SLS AMG Coupé’s bodyshell.

A few specific modifications to the aluminium spaceframe

Owing to the omission of the coupé roof and gullwing doors, the open-top SLS AMG has a reinforcing cross-member behind the seats which supports the fixed rollover protection system. Not forgetting the 250-watt subwoofer of the Bang&Olufsen BeoSound AMG high-end sound system: This is accommodated in the cross-member, as the Coupé-specific location on the parcel shelf is not available owing to the Roadster’s soft top. 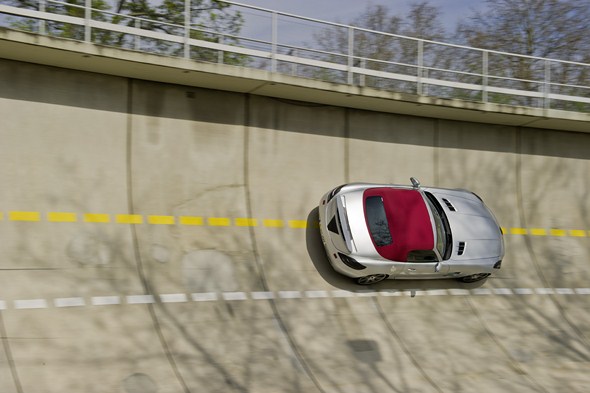 One particular challenge was acoustic insulation of the cross-member, which acts as a subwoofer housing for the two 165-millimetre speakers connected in series. Numerous improvements became necessary before the required listening pleasure was achieved. It was only with the help of a special bulkhead within the aluminium cross-member that all audiophile standards could be satisfied.

The three-layered fabric soft top of the SLS AMG Roadster, which is deposited behind the seats in a Z-formation to save space, is also an aspect relevant to handling dynamics. This weight-optimised, combined magnesium/steel/ aluminium construction ensures a low centre of gravity and is designed for speeds up to the maximum of 317 km/h (electronically limited).

Whether open or closed, even at top speed there must be no intrusive flapping, booming, hissing, clattering, whistling or howling. Likewise the push-on glass draught-stop and the panelling in the interior, on the soft top and along the beltline must be vibration-free. Nothing must be allowed to compromise the open-air enjoyment. The basis for verified, customer-compatible results in extreme conditions is provided by precisely defined test drives on the high-speed tracks in Papenburg, Nardo (Italy) and Idiada (Spain). 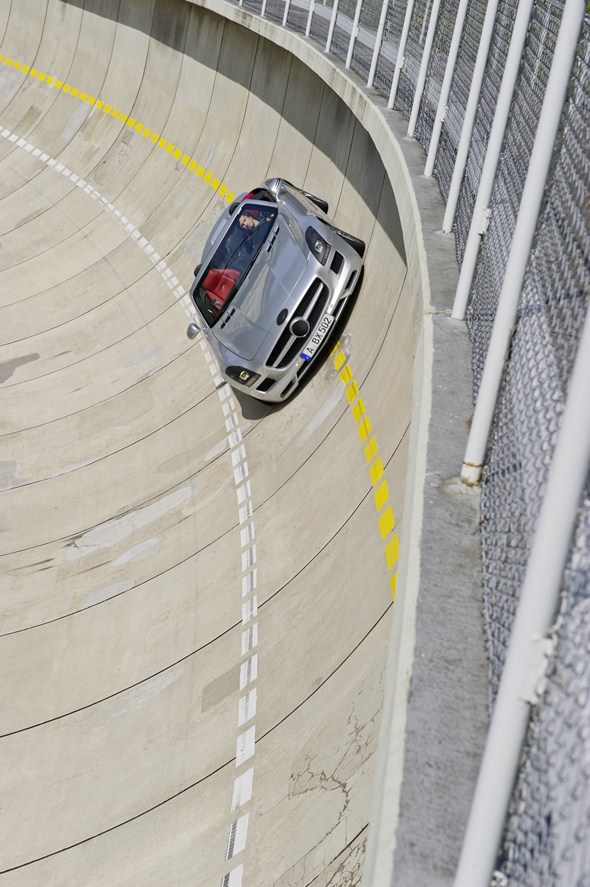 The excellent acoustics – which AMG engineers have naturally also verified with sophisticated measuring technology – also benefit from another special feature, namely the seamless, bonded-in rear window of single-layer safety glass. A special production process not only ensures a smooth transition between the outer skin of the soft top and the glass, as the sum of these design measures also leads to low wind noise when the roof is closed – at any speed.

125 years of experience with innovations in open-top vehicles

Ensuring that the soft top is wind and waterproof is a complex undertaking, and AMG and Mercedes-Benz have used the enormous experience gained during 125 years of innovation. There have always been open-top vehicles in the history of Mercedes-Benz – and unlike in the case of many competitors, in an uninterrupted sequence. 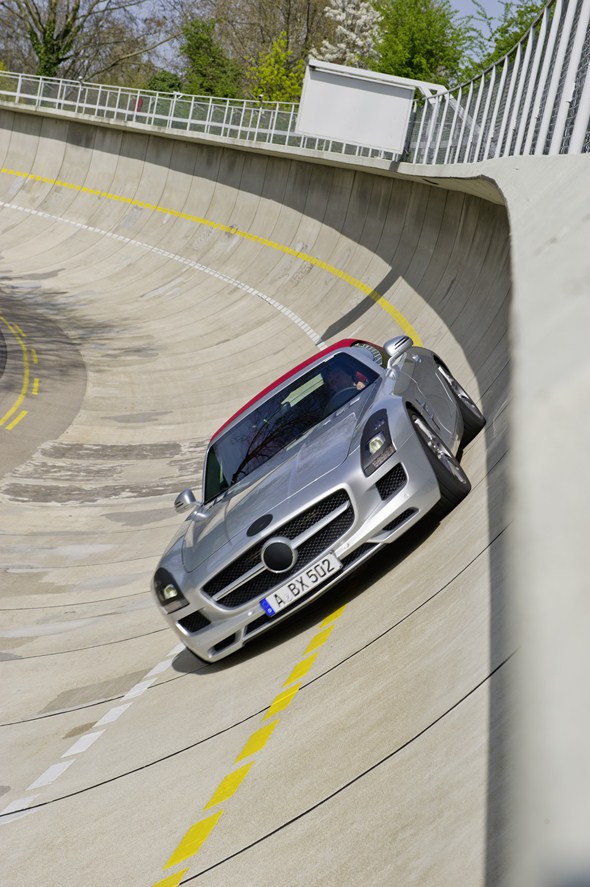 Every soft top is different, however, and even objectives already defined become more ambitious over time. The five challenges to which the AMG developers of the SLS AMG Roadster gave great attention and commitment were water, sand, dust, heat and cold. One special feature of the compact soft top is the continuous water pocket: this is attached below the soft top to catch rainwater and direct it down to the underbody via two apertures on each side. 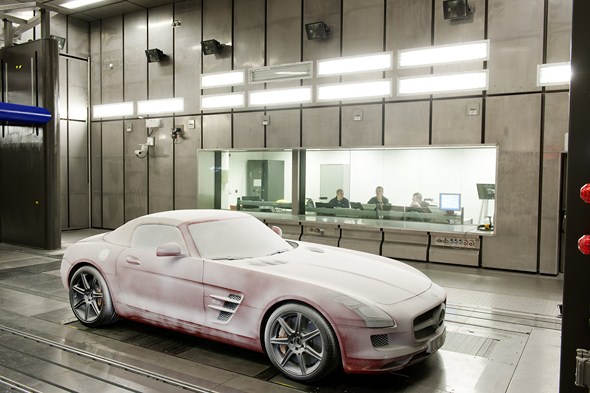 All the development aspects of a vehicle which involve flexible deformation are always very complex. Simulations can sometimes lead to false conclusions, and do not always provide the most cost-effective solution. Classic test procedures often help to achieve rapid results. Development project manager Holger Strahl (34): “In this field it is not possible to simulate everything with CAD, and it becomes a matter of trying out, driving, testing and improving.

The solution finally approved must also be suitable for series production, of course. Our specialist departments and the overall development team work together very closely in their common search for the perfect solution.” He also adds: “There is no such thing as the second-best alternative for AMG.”

The rain test at the Mercedes Technology Center (MTC) in Sindelfingen is particularly demanding, and every new vehicle bearing the Mercedes star is required to pass it – whether it has a fixed roof, a soft top or a vario-roof. Extreme quantities of water are used to ensure that the result of the development work is watertight – which is a particular challenge in the case of roadsters or cabriolets. 16 tests must be successfully absolved before approval is granted. 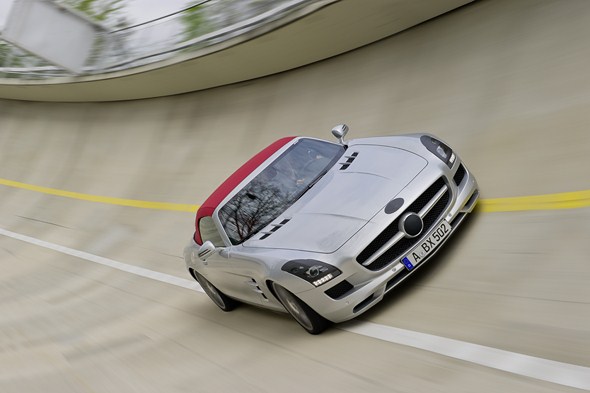 Whether during the hose test, when all soft top, door and flap seals are sprayed with a water-hose, the continuous, overnight rain test, the fording test, the icing, swirl and high-pressure tests, or the final session in an automatic car wash – the rain test simulates every conceivable situation that can occur on any continent.

Bench testing and practical trials in all climatic zones

In addition to various test facilities such as the water chamber and the climate/ wind tunnel, the AMG specialists have recourse to test drives in all climatic regions of the world, where problems can be identified and solutions sought. In Laredo, Texas, for example, there is a particularly fine dust which finds its way into practically any gap – and tests the seals to the absolute limit. 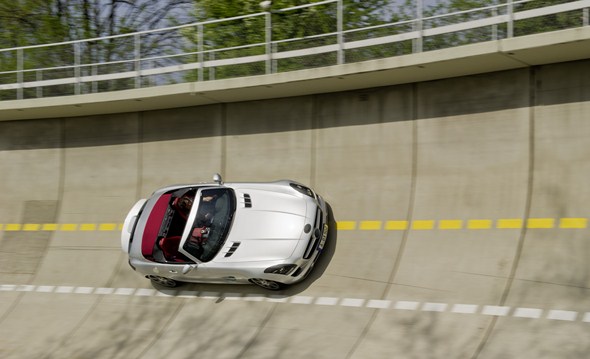 The compact fabric soft top, which can be conveniently opened and closed in just 11 seconds at the touch of a button, even at speeds up to 50 km/h, must also submit to various tortures. One of these is the standardised soft top endurance test used for all new Mercedes roadsters or Mercedes cabriolets: 20,000 closing cycles on a stationary test rig must present no problem for the hydraulic cylinders, electric motors and joints. There are also 2500 closing cycles while on the move, whether in great heat, icy cold, high humidity or dry desert winds. In this area too, nothing is left to chance – and for excellent reasons: the aim of this enormous effort is to give the customer limitless driving pleasure in their SLS AMG Roadster.

All the optimisation stages have been absolved, and the production tests at the Mercedes-Benz plant in Sindelfingen have been successful, but the developers have still not reached their goal. The quality of the overall vehicle is now the focus of the accompanying endurance trials. These simulate an entire vehicle life under the toughest conditions in accelerated test cycles. The aim is to verify the level of maturity before production of customer vehicles commences.

The endurance testing at a glance:

Long-term testing on a variety of different roads:

World premiere on 13 September 2011, at the International Motor Show (IAA) in Frankfurt/Main

This is an extensive and tightly scheduled programme, and for many an AMG engineer it will only begin to lose its immediacy at the world premiere on 13 September 2011, when the new SLS AMG Roadster is presented to a barrage of media attention at the International Motor Show in Frankfurt/Main.