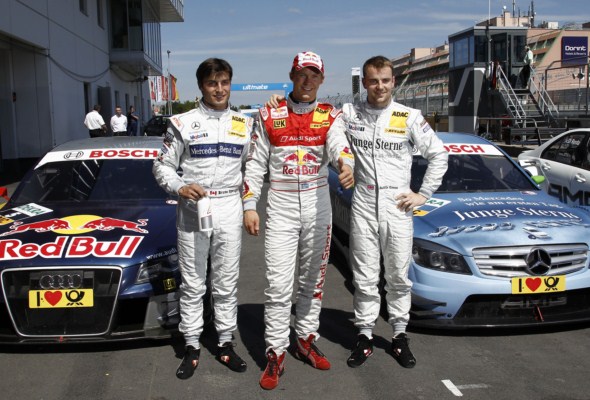 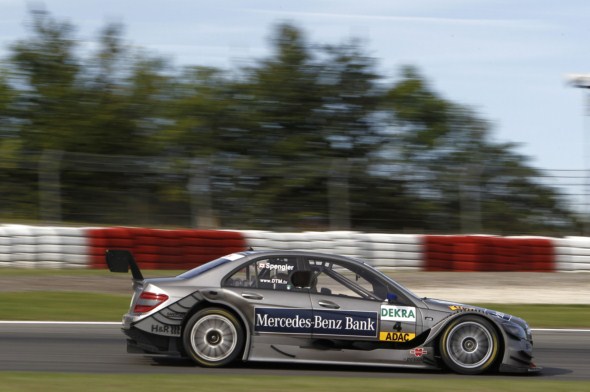 Bruno Spengler (Mercedes-Benz Bank AMG C-Class) second (1:24.212): “I am happy with second place. Of course I had hoped for pole position until the very end, but Mattias Ekström was a little bit faster today. I will start on the inside and maybe I can already pass him at the first corner. My team did a great job and I can hopefully reward them tomorrow with maximum points.”
Jamie Green (Junge Sterne AMG Mercedes C-Class) third (1:24.310): “Third place is not bad with a last year’s car. In Q3 I was even second. My guys worked really well and I thank all of them. A podium finish tomorrow would be a nice reward and I will fight for it.”
Paul Di Resta (AMG Mercedes C-Class) fourth (1:24.378): “Fourth on the grid is quite OK. Jamie and Bruno were a bit faster today, but in the race anything can happen. Tomorrow I want to do better.”
Gary Paffett (Salzgitter AMG Mercedes C-Class) fifth (1:23.748): “I improved from practice to practice, so fifth place is good. Unfortunately I was not able to post the same times as Jamie and Bruno, but it will be a long race and everything is possible.”
Ralf Schumacher (Laureus AMG Mercedes C-Class) sixth (1:23.854): “Sixth place is not bad. Last year I qualified 15th so I improved significantly. Unfortunately I didn’t manage a clean lap and therefore missed the single-lap qualifying by a little more than a tenth. It’s a shame, but I should be able to achieve a good result also from row three.”
David Coulthard (Deutsche Post AMG Mercedes C-Class) 10th (1:24.093): “I’m satisfied with my result. My team followed my suggestions after free practice and I improved by about half a second. Now I will focus on the start to get a good basis for the rest of the race.”
Maro Engel (GQ AMG Mercedes C-Class) 12th (1:24.455): “I was sixth in Q1 which was really motivating; however, this season we are not able to keep the same good balance throughout the entire qualifying. In Q2 I suffered from oversteer and was not able to improve.”
Susie Stoddart (TV-Spielfilm AMG Mercedes C-Class) 14th (1:25.537): “12th place in the first part of qualifying was not bad, but in Q2 I struggled with my tyres and dropped back.”
CongFu Cheng (stern AMG Mercedes C-Class) 18th (1:25.125): “In this morning’s free practice I felt a lot more comfortable on this track than in qualifying; however, I cannot explain why. My team mates showed a solid pace, but I was not able to do the same.” 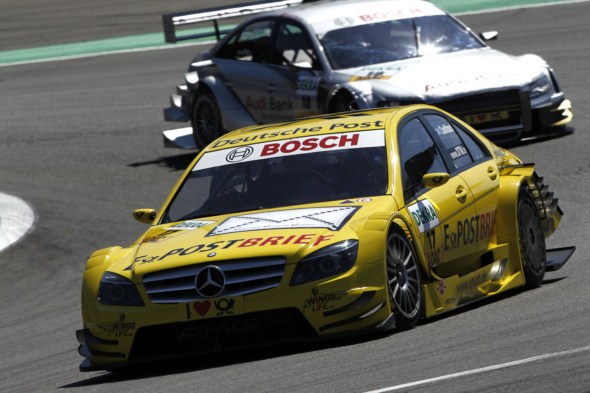 Norbert Haug, Vice President Mercedes-Benz Motorsport: “Congratulations to Mattias on pole position and thank you to our guys for position, two, three, four, five and six – a performance with a star.
For the fourth consecutive time, Bruno will start second on the front row. With the C-Class with which he won the Norisring race three times in a row, Jamie was only two and a half tenths slower than Ekström in Q3. A good qualifying also from Ralf Schumacher and David Coulthard. David missed Q3 by just four hundredths of a second. A good team performance by HWA headed by Gerhard Ungar and by our partners Persson and Mücke. We hope to show a similar performance tomorrow.”
Tags
DTM nurburgring