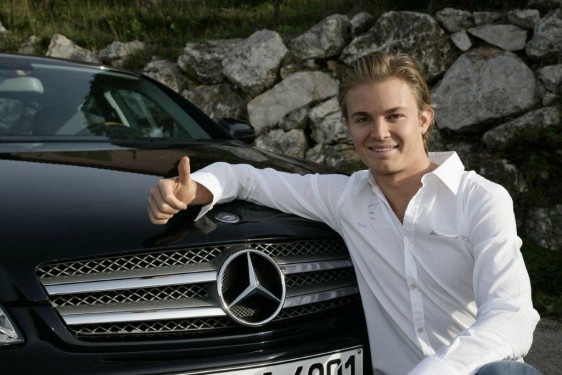 From the 2010 season, German driver Nico Rosberg (24) will drive for the new Mercedes team in the Formula 1 World Championship, Mercedes-Benz Motorsport announced today.
Three years after his father Keke had won the Formula 1 World Championship, Nico Rosberg was born in Wiesbaden, Germany on 27 June 1985, inheriting his racing DNA from his father.
At the age of eight, Nico Rosberg began racing karts. From 1997 until 2000, he raced for the MBM team (the talent support programme of Mercedes-Benz McLaren); with this team, the two Formula 1 partners encouraged young talents. Nico’s team-mate at that time was Lewis Hamilton, McLaren Mercedes driver since 2007 and 2008 Formula 1 World Champion. In 2000, Nico was runner-up in the Formula A European Championship. Two years later, he entered his first car races in Formula BMW ADAC and clinched the title in his debut year with nine victories out of 18 races. A Williams Formula 1 test drive was the reward for the championship win – at the age of 17, Nico was the youngest driver ever to get such an opportunity.
In 2003 and 2004, Nico Rosberg participated in the then new Formula 3 Euro Series; in his first year he came home second in the rookie rankings and in 2004 he finished fourth overall. One year later in 2005, he moved up to the GP2 series which is staged alongside Formula 1 events and won the title.
The 2006 season opener at Bahrain on 12 March was Nico’s first Formula 1 race; he finished seventh and posted the fastest lap. To date, he has taken part in 70 Grands Prix, all for the Williams team; scoring a total of 75.5 points and achieving second place at the 2008 Singapore Grand Prix as his best Formula 1 result. The 2009 season was Nico’s best in Formula 1 so far; finishing seventh overall with 34.5 points.
Nico Rosberg grew up in Germany, Monaco and at Ibiza; in addition to his mother tongue he is fluent in English, Italian and French.
Nico Rosberg: “I am really happy to be a part of the Silver Arrows re-launch in 2010 as a driver for Mercedes. No other brand in Formula 1 can look back on such a long and successful tradition in motor racing. I am very proud that I will now drive for the new Mercedes team and work with Ross Brawn. I am more motivated than ever and can hardly wait to start testing with the new Silver Arrow and for the first race of the new season at Bahrain on 14 March 2010.”
Ross Brawn, Team Principal:“We are delighted to welcome Nico Rosberg to our Mercedes team and are very much looking forward to working with him. Nico is a great talent, and with four years of experience in Formula 1, is a driver who will be able to make a valuable contribution to our team right from the outset. I had the pleasure of working with his father Keke during his Formula One career and it is great to see Nico following in his footsteps. 2009 was Nico’s best season in Formula 1 to date and we look forward to seeing his development continue with us at Mercedes next year.”
Norbert Haug, Vice President Mercedes-Benz Motorsport: “I saw Nico racing karts alongside Lewis Hamilton and later in the support programme of the DTM events – I have known him since he was a young boy. Early on it was obvious that he would make his way as a race driver and we are glad that after four years with Williams he will now be one of our drivers at Mercedes. It makes our re-start even nicer, that we have as talented and sympathetic a driver as Nico in our line-up.Nico has positive ambitions, we have positive ambitions and together we want to achieve a great deal. I am really looking forward to working with him.”
Tags
f1 FormulaONE