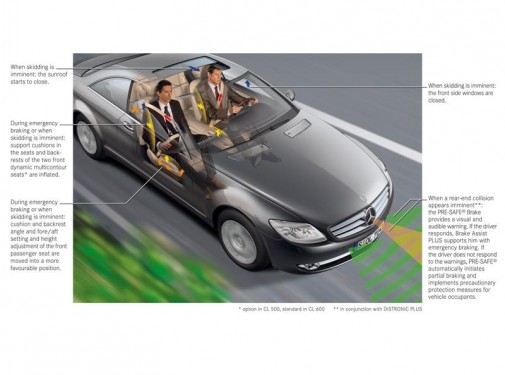 The anticipatory PRE-SAFE protection system is included in the standard safety equipment for the new CL-Class, which makes its market debut in the autumn of 2006.

This award-winning technology goes into action if an accident is imminent and protects the occupants of the new luxury coupe against the effects of an impending collision.

Available as an option is the PRE-SAFE brake, an additional new feature that automatically slows the CL-Class down when the risk of an accident is recognised.

No comparable safety technology is found in any other car in this vehicle class. 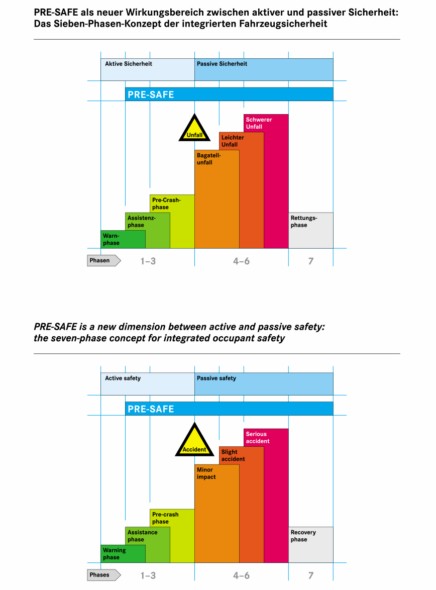 With PRE SAFE, Mercedes-Benz ushered in a new era of passenger car safety.

For the first time, this system is able to create a synergy between active and passive safety: on the basis of sensor information from active handling safety systems, which register the danger of a skid or very heavy braking within milliseconds, PRE-SAFE uses the time between detection of a potential accident and activation of the protective systems in the vehicle interior.

During this interval, PRE-SAFE prepares the occupants for the impending collision as a precaution. 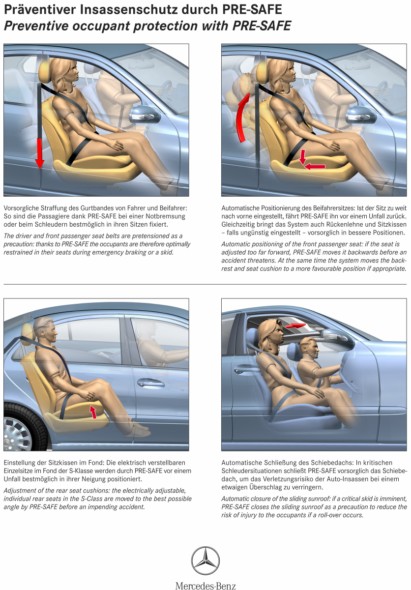 In other words, PRE-SAFE gives the car reflexes. When danger is detected, the new CL-Class responds as reflexively as a living being and activates the appropriate protective measures to avoid the risk of injuries or reduce their severity.

This Mercedes invention is in line with the findings of accident researchers, which show that more than two-thirds of all serious accidents are preceded by critical driving manoeuvres that allow an impending collision to be predicted in advance.

In the new CL-Class, PRE-SAFE uses this advance accident detection phase, which can have a duration of several seconds in some cases, to: move the front passenger seat to a more favourable position with respect to height and fore-and-aft adjustment, as well as cushion and backrest angle, during emergency braking, so that the seat belt and airbag are able to work most effectively during an impact, and to inflate the air chambers in the dynamic multi-contour seats (optional) to support the driver and front passenger and press them more firmly into their seats. 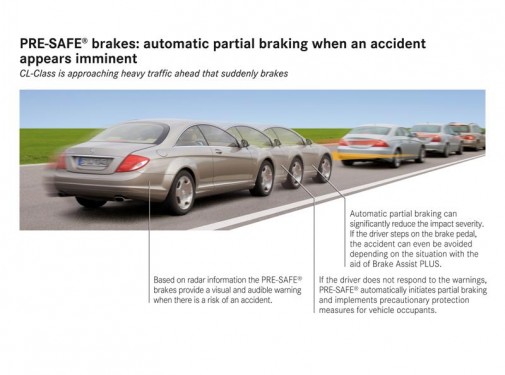 additionally close the front side windows and sliding sunroof if the car starts to skid, so that the occupants are not thrown out and the windowbags have better support during a side impact or rollover. Automatic partial braking when a collision is imminent 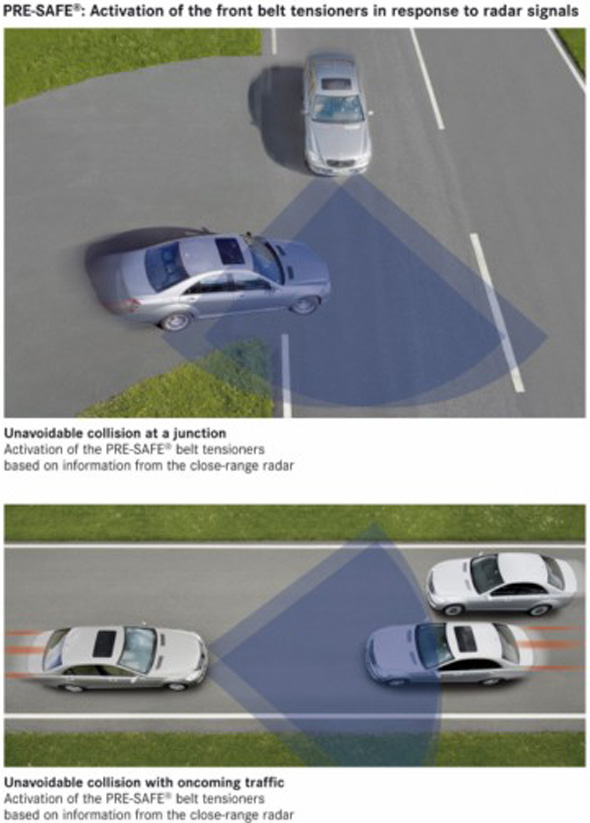 This unique system automatically brakes the CL-Class before an impending accident and operates in tandem with the Brake Assist PLUS (BAS PLUS) system introduced last year, which warns the driver of an imminent rear-end collision with visual and audible signals and automatically calculates the required braking pressure to prevent an accident.

This braking-power support is available as soon as the brake pedal is operated. 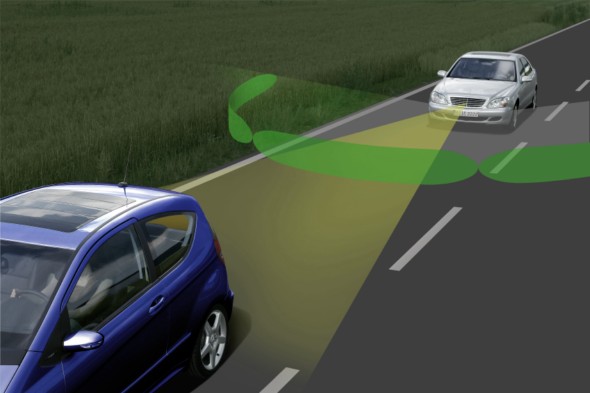 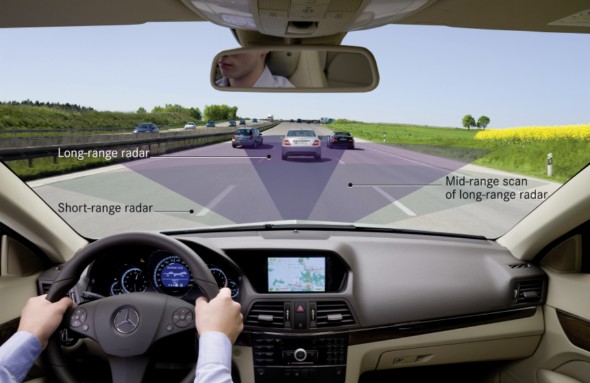 In addition to the visual and acoustic warning, the automatic partial braking provides the driver with another clear warning to act.

If the driver then immediately applies the brakes, the maximum braking force is available and the accident can – depending on the situation – be averted at the last moment.

If an accident is unavoidable, the PRE-SAFEbrake system reduces the impact severity and, in turn, the risk of injury to the vehicle occupants.

The anticipatory PRE-SAFE measures on board the new Mercedes coupe are also activated automatically when the PRE-SAFE brake system goes into action.

As soon as the system commences automatic partial braking, the supporting bolsters in the dynamic multi-contour seats are inflated and the front passenger seat is moved to the most favourable position.

As with Brake Assist PLUS, the new PRE-SAFE brake system also utilises state-of-the-art radar technology to scan the situation in front of the car and detect a potential accident.

Two short-range radar sensors with a range of 30 metres and a scanning angle of 80 are located behind the front bumper fascia on the CL-Class.

The additional long-range radar in the radiator grille has a range of 150 metres.

Accident severity reduced by 40 per cent 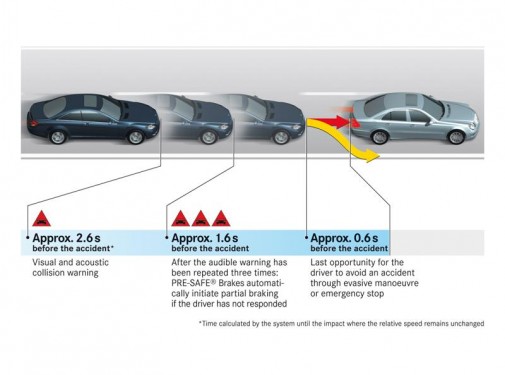 Mercedes-Benz has conducted extensive tests on the effectiveness of the new PRE-SAFE brake system.

In the DaimlerChrysler Research driving simulator in Berlin, Mercedes engineers conducted a series of tests with 70 drivers who were deliberately distracted by an accident on the opposite carriageway during their journey, while the traffic ahead of them suddenly braked at the same time.

The results of these tests demonstrate the increased safety made possible by the state-of-the-art support systems in the CL-Class: thanks to the rapid reaction of the drivers and the help of BAS PLUS with the PRE-SAFE brakes, an accident was avoided during 70 per cent of these journeys.

In one-third of these simulator tests the participants were unable to prevent an accident.

In these cases the automatic partial braking function ensured a reduction of around 40 per cent in impact severity. 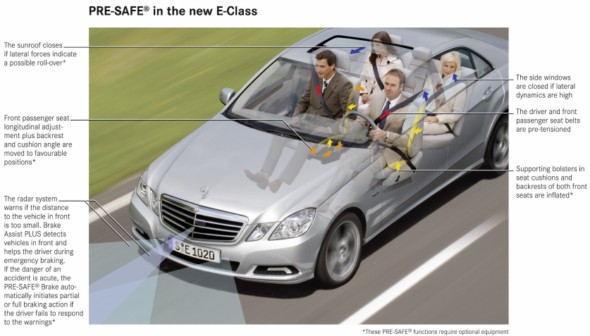 Mercedes-Benz also offers the PRE-SAFE brake system in conjunction with the optional DISTRONIC PLUS proximity cruise control and the BAS PLUS braking assistant.

Comfort as an audible experience