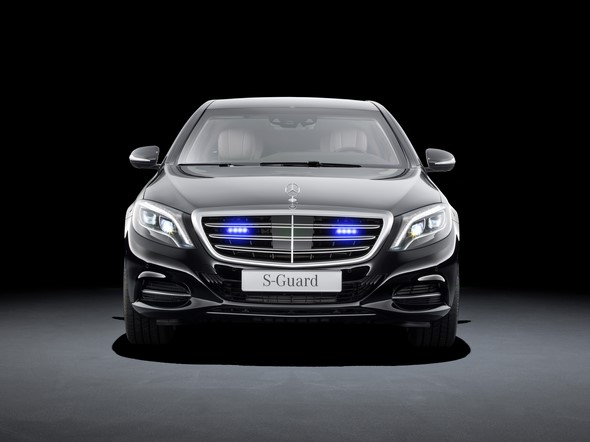 Special protection to the highest standards

Stuttgart – Mercedes-Benz has updated its range of special protection models with the new S 600 Guard based on the new S-Class.

The S 600 Guard provides all-round protection to the level of resistance class VR9 (both in transparent and non-transparent areas). The armouring of the S 600 Guard follows the principle of integrated protection based on many years of Mercedes-Benz experience in building special protection vehicles. The major advantages are:

Already at the bodyshell stage, protective components of special steel are integrated into the cavities between the body structure and the outer skin. Special aramide and PE components provide additional splinter protection. 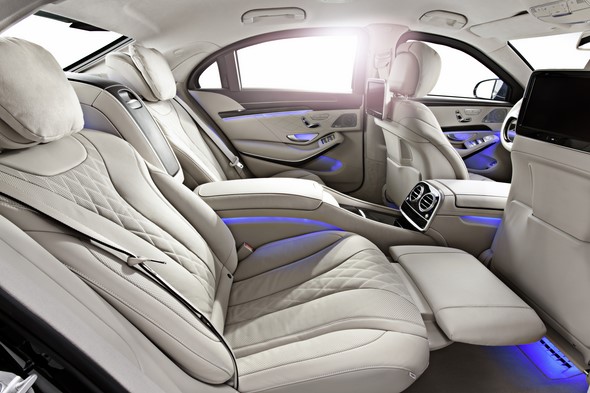 The glass areas are an essential part of the protective concept. They are coated with polycarbonate on the inside for splinter protection, and have outstanding visual characteristics thanks to their laminated structure.

Particular attention is devoted to the protective performance of the glass areas, with an appropriate choice of materials and thicknesses.

The interaction between all the components provides the occupants with a highly effective protective space which not only includes ballistic protection, but also comprehensive protection against explosive devices.

The occupants are effectively protected by the armouring if a splintering explosive charge is fired at close range on either side. 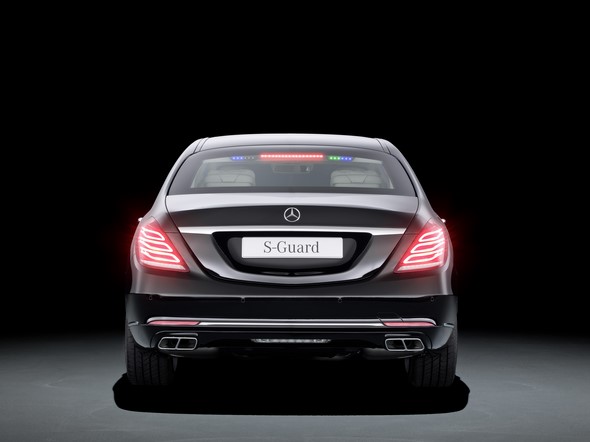 With its sophisticated and strong protective system, the new S 600 Guard has immediately met all the personal protection requirements of the relevant authorities in Germany, and is the first vehicle to have been comprehensively certificated for highest ballistic protection in resistance class VR9 (according to BRV 2009, version 2). 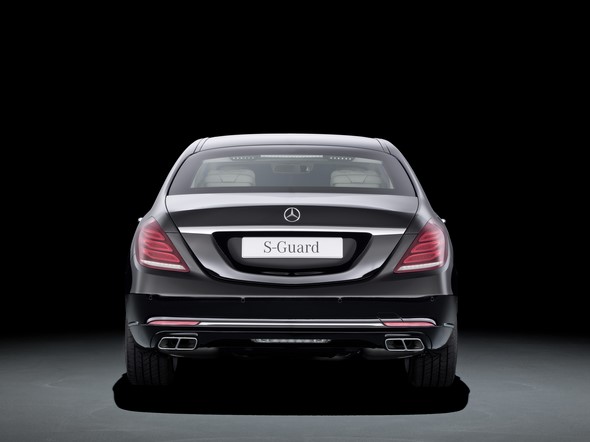 Where explosive charges are concerned, the new S-Guard has demonstrated its protective capabilities by meeting the requirements of ERV2010 and the Federal Office of Criminal Investigation. 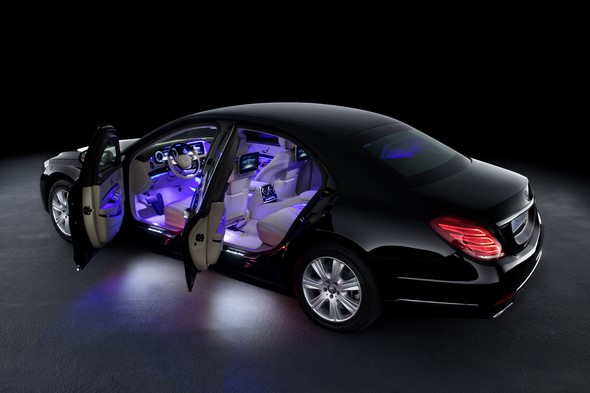 Discretion as a matter of course

Despite the extensive protective measures, the S 600 Guard is externally hardly distinguishable from the standard model.

Its exterior has the same emphatic lines that already suggest power and dynamism when at standstill, the same striking design of the LED High Performance headlamps and the same LED rear light clusters inset like gemstones.

As the S 600 Guard is hardly recognisable as an armoured saloon, it meets a further important requirement for special protection vehicles: maximum discretion thanks to unobtrusiveness. 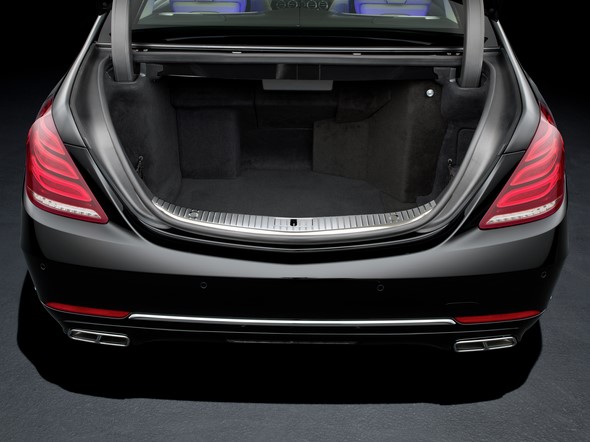 The S 600 Guard has a generously spacious interior. Like the flagship S-Class model, the S 600 Guard excels with exemplary headroom and elbow room in the rear, and is also in a class by itself in this segment in terms of comfort dimensions such as entry height and door apertures.

In addition, for the first time and as the only car in this segment, the new S 600 Guard is available both as a 4-seater and as a fully-fledged 5-seater, and offers unrestricted day-to-day suitability by virtue of a 350-litre boot capacity and high payload.

Thanks to the intelligently integrated armouring, the Guard version retains the first-class ambience of the S-Class Saloon for its occupants, and meets the highest expectations with regard to perceived quality, appointments and comfort.

The comfort features of the standard model, and especially its innovations, are also almost without exception available for the S-Guard. These include: 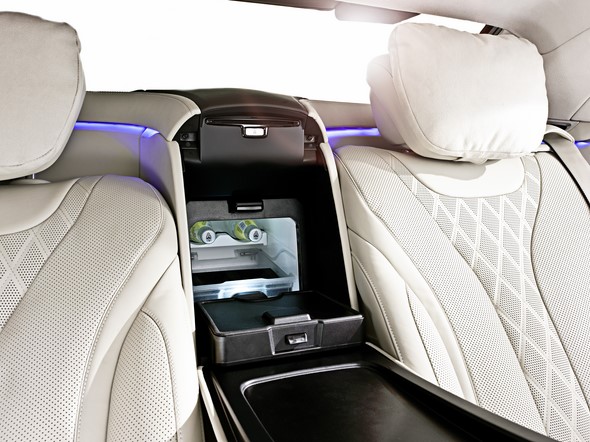 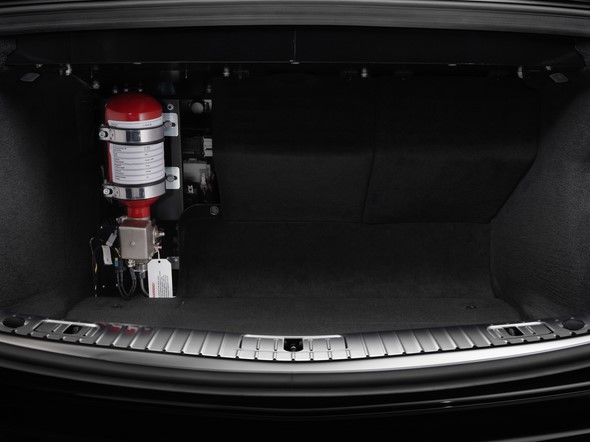 The S 600 Guard delivers superior performance thanks to its V12 petrol engine, which now generates 390 kW (530 hp) and therefore has even more pulling power than the engine of the preceding model.

Thanks to 830 Nm of torque and the 7G-TRONIC automatic transmission, which is available with the V12 engine for the first time, the S-Guard combines lower fuel consumption with impressive acceleration for a rapid escape from the danger zone when under threat.

For weight reasons the top speed is electronically limited to 210 km/h. 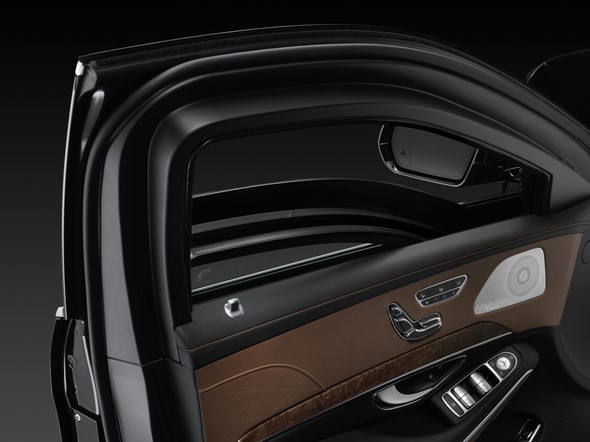 This is ensured by the AIRMATIC air suspension with variable damper control, as well as reinforced, redimensioned suspension components and adapted control functions such as ESP® or ASR to cope with the increased vehicle weight.

The air springs at the front are reinforced, for example, and additional steel springs are used at the rear axle. As in the unarmoured S-Class, all-round level control also maintains a constant vehicle level irrespective of the payload in the S‑Guard. In the S 600 Guard it also compensates the reduced ground clearance caused by the underbody armour. 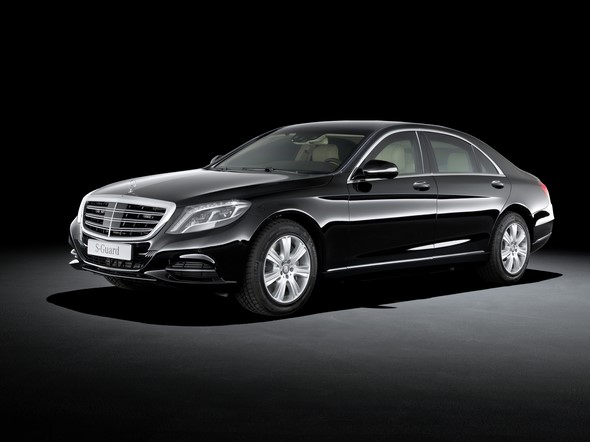 The brakes of the S-Guard are considerably larger than those of the standard model, so that the extra weight can be safely handled. Larger 6-piston brake callipers and significantly larger brake discs are used at the front axle, for example. The rear brakes are also of larger dimensions than on the standard model.

Standard equipment on the S 600 Guard includes Michelin PAX run-flat tyres with an additional tyre pressure monitoring system which allows an escape from the danger zone up to a distance of 30 km even with damaged tyres. 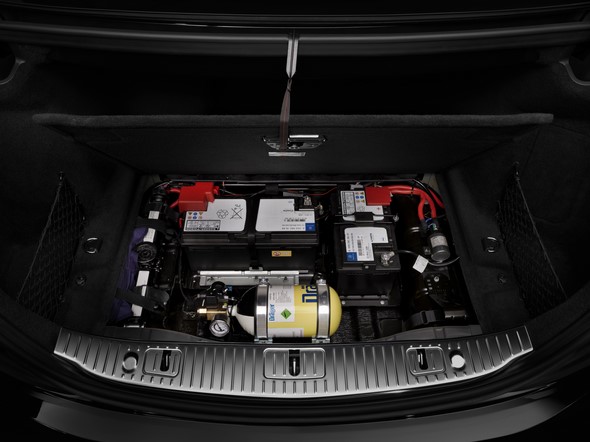 The S 600 Guard is also equipped with the latest technical innovations that make the Mercedes-Benz S-Class a shining example of passenger car development in general and the world’s best-selling luxury saloon. As part of Intelligent Drive, these optionally include assistance systems which considerably enhance comfort and safety.

The following options are available: 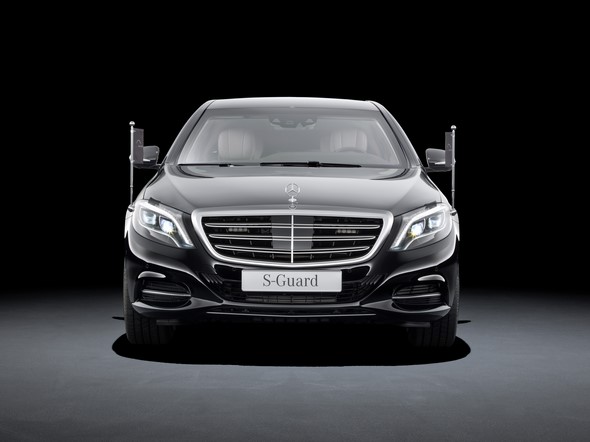 In addition Mercedes-Benz offers further optional extras which were specifically developed for the S-Guard. These include:

As in the case of standard production models, the full manufacturer’s warranty also applies to the S 600 Guard and the other models in the Guard family.

All the Mercedes-Benz service outlets worldwide are also able to service, maintain or carry out any necessary repairs for the Guard models. 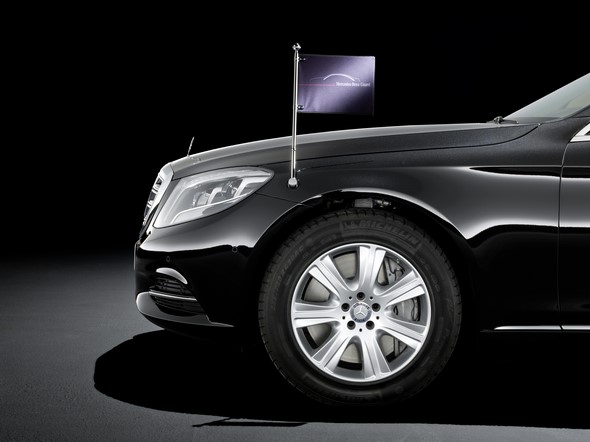 The Mercedes-Benz Guard range currently has models from the S, E, M and G-Class. Mercedes-Benz offers the most extensive range of special protection vehicles, with a total of nine models.

All E-Guard models provide high protection in resistance class VR4 (according to BRV 2009).

The Mercedes-Benz G-Class is also available in a special-protection version. The G 500 Guard is equipped with a 5.5-litre V8 engine and highest protection to VR6 or VR7 (according to BRV 2009).

The M-Guard is available as the ML 350 BlueTEC with a V6 diesel engine and as the ML 500 with a powerful V8 petrol engine.

As a special protection vehicle, the M-Guard with its integrated protective components meets all the requirements for resistance class VR7 (according to BRV 2009). 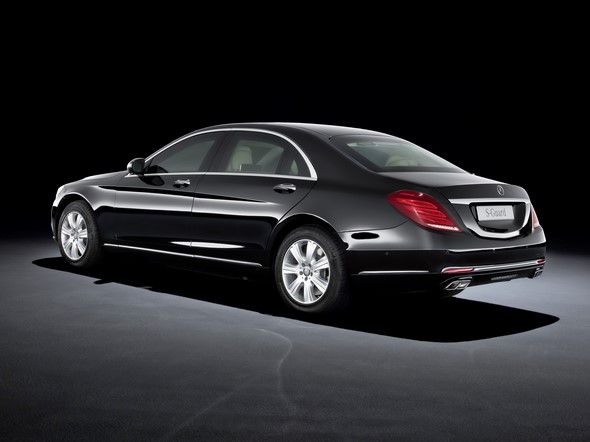 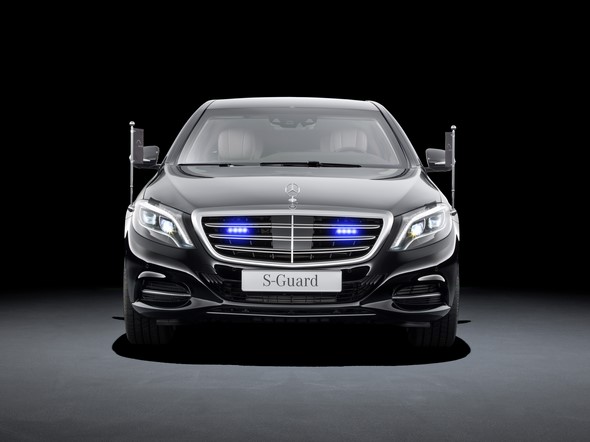 Their armour is designed to resist rifle-fire from military weapons, which has a velocity almost twice that of handgun bullets. They also offer resistance to splinters from hand-grenades and explosive charges.

More light in every situation