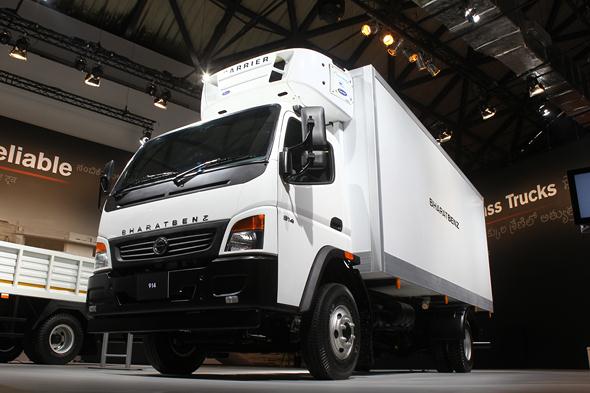 Stuttgart / Chennai, India – Following the market launch of its heavy-duty trucks two weeks ago, the Daimler Trucks subsidiary Daimler India Commercial Vehicles (DICV) has now reached another milestone by starting production of its medium-duty trucks (9 and 12 tons). The BharatBenz vehicles are manufactured at the Chennai production facility in Southern India, which was inaugurated in April of this year.

“The start of production of our new BharatBenz vehicles is right on schedule for our truck model offensive in India. Along with our Indian heavy-duty vehicles, these trucks, which are based on the successful Fuso Canter and Fighter platforms, represent another step in the implementation of our multi-brand modular strategy,” says Andreas Renschler, the Daimler Board of Management member responsible for Daimler Trucks and Daimler Buses.

The Indian brand’s heavy-duty models are based on the Mercedes-Benz Axor, but have been completely redeveloped, which also applies to the medium-duty trucks. In addition, BharatBenz products have a localization rate of 85 percent.

Until 2014, DICV aims to launch a total of 17 truck models weighing between 7 and 49 tons. The vehicles are especially designed to meet the rising customer requirements in India, where the demand for high-quality yet economical trucks in the modern domestic segment will increase in the coming years.

Marc Llistosella, Managing Director and CEO of DICV, underlines: “We are able to offer an attractive mix of products to our customers. The rising fuel costs are becoming an issue in India, which is why truck customers want vehicles that are fuel-efficient as well as reliable and robust. Overall, our product range offers the best total cost of ownership.”

The medium-duty BharatBenz trucks can be used for a wide variety of applications. The vehicles that are primarily used at construction sites or for distribution transportation have an engine output of
140 hp or 170 hp and can, for example, be fitted with refrigeration bodies supplied by body manufacturers. At the same time, the vehicles are at least ten percent more fuel-efficient than comparable products on the Indian market.

Daimler India Commercial Vehicles is a wholly owned subsidiary of Daimler AG, which is based in Stuttgart, Germany. Since this year, DICV produces commercial vehicles for the Indian volume market. The products are customized to serve all major customer segments, ranging from owner-drivers to large fleet operators.

In cooperation with local car and commercial vehicle dealers, DICV is currently building up a nationwide retail network that will encompass more than 110 sales locations by 2014.

To support the business activities of DICV and its BharatBenz brand, the Daimler subsidiary Daimler Financial Services India Plt. is offering financial services products and insurance solutions that are especially tailored to the needs of dealers and customers. These offers are branded as BharatBenz Financial products.