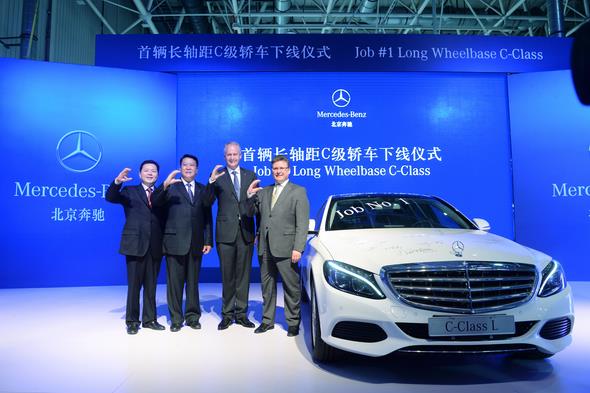 The model, which will be launched in China starting this September, is an important addition to Mercedes-Benz’ portfolio and marks another key milestone in Daimler’s China strategy.

“The C-Class is at the core of our development in China. With more than 150,000 vehicles of the predecessor model delivered to customers, China has already become the second-largest market for the C-Class,” says Hubertus Troska, member of the Board of Management of Daimler AG responsible for China.

“Now we are taking the next step: designed and developed for China, produced exclusively in China, ourall-new long-wheelbase C-Class is destined to become one of our top growth drivers here.”

Frank Deiss, President and CEO of BBAC: “Given its production in four plants on four continents, the C-Class sedan is our most global model. As a part of Mercedes-Benz’ global production network, we are committed to deliver ‘The best or nothing’ – in Beijing, like elsewhere. This has always been a driving factor of our great success in the past, and will continue to be so in the future.” 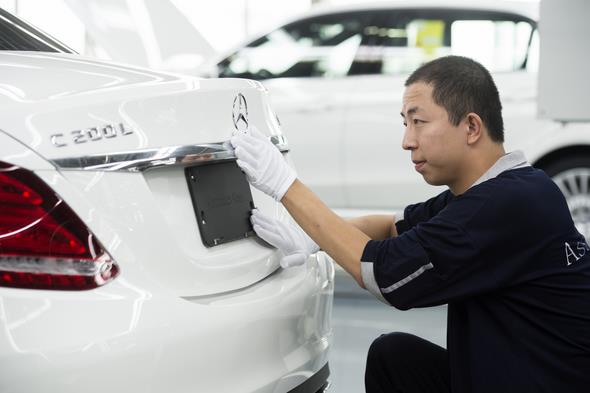 Such a global ramp up within less than six month is unparalleled in the premium segment so far.”

The Bremen plant, in its capacity as the so-called lead plant, is guiding the global production of the C-Class – from the tooling strategy to the training of colleagues from international plants to production quality.

With this, the company ensures top quality at all its production sites from the outset. In total, some 500 employees from international plants in East London/South Africa, Tuscaloosa/USA, and Beijing/China completed intensive training in Germany in order to pass on their knowledge as multipliers in their respective home plants – among them more than 150 from Beijing.

With a wheelbase that is an extra 8 centimeters long, the long-wheelbase version of the C-Class offers its passengers the highest level of comfort with maximized backseat legroom. For even more comfort, the front row passenger seat can be adjusted by passengers sitting in the back seat.

With more advanced technology and a full range of assistant systems including a semi-autonomous driving pilot and an innovative touchpad that allows for operations of the head unit functions through Chinese handwriting, the new long-wheelbase C-Class also offers maximum safety and the latest in technology in its segment.

The engines powering the new C-Class are locally produced at BBAC in Beijing as well at Mercedes-Benz’ first ever passenger car engine plant outside of Germany. 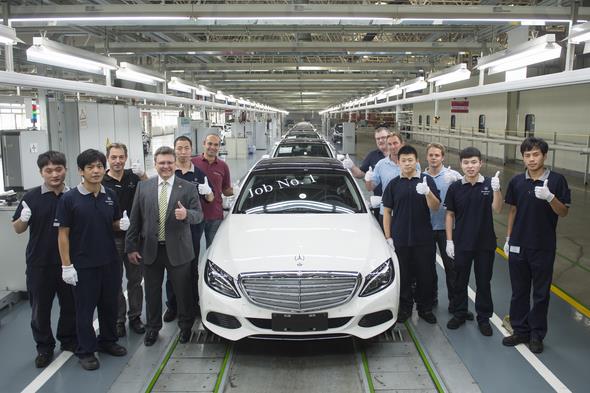 BBAC, a joint venture between Daimler and Chinese partner BAIC Motor, has been producing Mercedes-Benz passenger cars since 2006 and engines since 2013. Last year, around 120,000 vehicles rolled off production lines at BBAC, accounting for approximately one-half of Mercedes-Benz’ total sales volume in China.

Both partners are jointly investing €4 billion in BBAC through 2015, of which €1 billion alone was used for the expansion oflocal car and engine production capacity.

As a result, amongst others the existing production capacities at BBAC for the C-Class, the E-Class and the GLK-Class will be more than doubled to over 200,000 annuallyby 2015 – which by then will include the compact GLA, which will go into production at BBAC next year.

The Mercedes-Benz 4- and 6-cylinder engines produced at BBAC’s engine plant are used in locally produced cars from BBAC and vans that are built by Daimler’s local joint venture Fujian Benz Automotive Co., Ltd. (FBAC). The production line was designed with flexibility in mind, with an annual capacity of 250,000 units for the first phase.

About €90 million have been invested into the new BBAC R&D site that became fully operational just recently, making it the largest of Daimler’s joint venture R&D centers in the world, doing component and vehicle testing and supporting all production tests as well as future localization. It will give home to a cross-functional team of about 700 employees from R&D, quality management and purchasing.