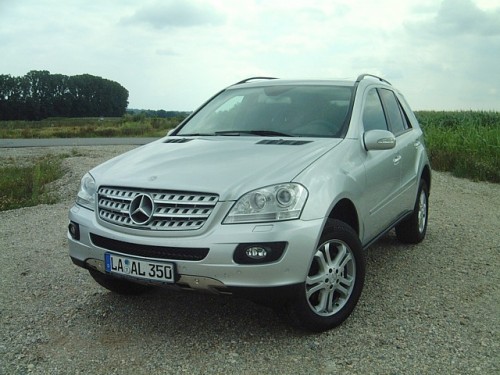 Today I was able to take the new W164 ML350 for a spin. Im already a big fan of the new M. Better looking, better built, better materials and better driving dynamics on and offroad make it a more appealing package than the original W163 M-Class. It doesnt look like a big car from the outside, but on the inside, there seems to be ample space.
This M-Class was colored in Iridiumsilber and had a dark colored sporty looking interior. I was hoping for a cream colored interior as I dont like dark interiors much. I also think a lighter colored interior would look better and more upscale on the car. On the outside, this M-Class had the optional chrome package, which adds chrome to the grille and certain exterior parts.

The interior was very nicely done IMO. Build quality and the quality of materials used appeared a million times better than that garbage used in the W163 M-Class. Its still not class leading Im afraid, but its definitely a solid, well-constructed and quality interior. Space was also generous. More so in the front than rear. I could fit in the rear without problems, but my legs felt a little claustrophobic, even with the front seats moved a little forward.

Under the hood was the brand new 3.5-l V6 gasoline motor with 272-horsepower and 350 Nm (258 lb/ft) of torque. This V6 is a gem. Its very smooth and torquey and works well in heavy cars. Im not a fan of gasoline engines in SUVs, but I guess the 350 is better than the ML500 because it gets better mileage. I was hoping for the ML320 CDI, but there was none available. The engine started with a nice roar, then quickly settled down into a quiet hardly audible idle. 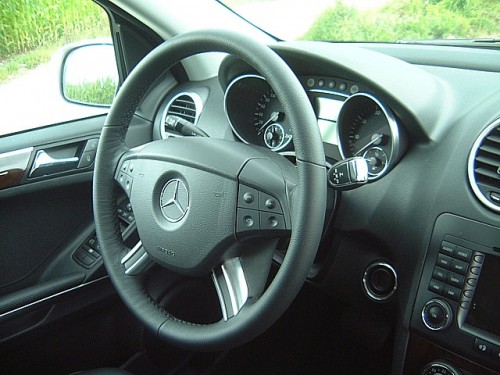 Shift the column lever into D, and the testdrive began. I had one hour to really enjoy this car and experience it. First, I took it around some local roads here. That meant, curves, uphill and downhill slopes and more curves. The ML350 performed amazingly well. For an SUV, it behaved very sporty and handled surprisingly well. The steering was quick acting, heavy and well weighted: just like in some of the newer MBs. Curves werent much of a problem. Compared to the last ML, this thing felt like a sports car. Body roll was there alright, but the car never felt unstable or on the brink of tipping over (the tires werent from Firestone thankfully :devil:]). Furthermore, the suspension was really tough during sporty driving, but at the same time, comfort was still surprisingly high. A few days ago, I had watch an SUV comparison on TV between the Mercedes ML500, Volvo XC90 V8, VW Touareg V8 and Range Rover Sport (they finished in that order BTW) and the testers said the exact same thing about the suspension.

The V6 motor was more than adequate for moving the 2,135 kg ML350 around. Naturally, I hammered it a few times and the car took off nicely. 0-100 km/h took place in 8.4 seconds according to MB. Midrange power was generous too. Acceleration was always steady and the engine never felt like it ran out of steam. When doing a kickdown, the V6 was powerful enough to push you back into the seats. Nothing brutal, but enough to remind you that it has enough power should you need it. Ive never driven a W163 ML320, but Im sure it must have been tough moving that bulk around with less horsepower and less torque.

Simple cruising was also a strength of the M-Class. On local roads, it glided across the tarmac softly and comfortably. I was quite impressed with the suspension and how it managed to offer both sporty and luxury driving characteristics. Overall though, the suspension was a little harder than in most Mercedes products. Understandable since the M-Class is an SUV.

The high seating position made this car fun to drive in. I admit that SUVs are fun to drive, but only with a diesel engine. Screw a V8. :devil:] My dad was interested in getting the new M-Class but he probably wont get it since its too expensive and the depreciation is just too high. I drove into town to pick up my mother and give her an impression of the M-Class. Driving through town was fun. People stared at the new M-Classand the 20ish looking kid driving it. :praise:]

As you can see from the pictures, I took shots of it on rough terrain. Nothing the M-Class couldnt master but the suspension was a little noisy on such roads. I dont think this ML350 had the optional Airmatic suspension package. Other than that, the suspension was fairly quiet on the roads I drove it on.

I had a blast driving this car. Its a major improvement over the last M-Class, which was a success. I prophesize that this ML may be even more successful. Good looks, spacious, better engines, better interior etc. Ignoring the high price tag (this ML350 was for sale at $ 63,000), this M-Class really is a quality car. Im glad Mercedes is on the right track. They did a good job with this car. I came away very impressed. What a fun car the new M-Class was. I enjoyed driving the old W163 ML270 CDI, but it was nowhere close to the fun factor you had with this W164 ML350.

What impressed me the most was the handling qualities of the ML350. Almost sports car-like, yet able to offer traditional Mercedes buyer values like comfort and cruising. What I didnt like? The V6 engine. Now dont get me wrong, its a wonderful smooth piece of Swabian engineering, but whod be dumb enough to buy that when you can have the ML320 CDI?

World premiere at the Auto China 2006 in Beijing: The new Maybach 62 S