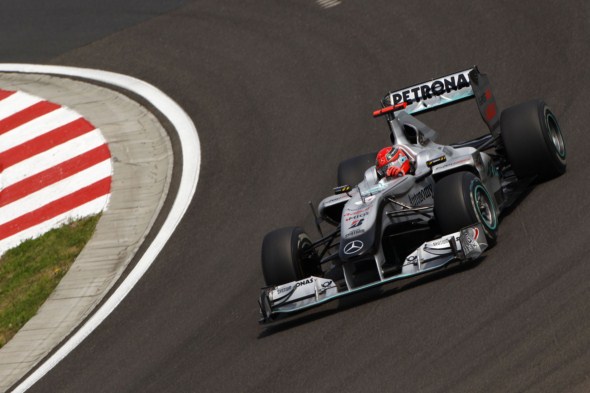 Nico lost a position at the start and was running in seventh place when he came into the pits on lap 16 following the deployment of the safety car. A problem with the nut on the right rear wheel saw the wheel come loose as Nico went down the pitlane and led to his retirement. With Michael following quickly into the pits, the incident had an impact on his stop, costing valuable track time and despite a battle for tenth place, he ultimately finished outside of the points.

“Today’s race was probably was one of the toughest that I have had so far. It was pretty edgy to drive the car on the limit so I had to fight my way through the race, and at the end, it was like walking on ice. Regarding the overtaking manoeuvre with Rubens, I indicated pretty early that I would move towards the inside and not simply give up the line, and there was just enough space for him to pass me without touching each other. It was a hard fight, and this is what we are here for, but I accept that the FIA stewards saw it as too hard. I look forward to the break now and to coming back out of it stronger in Spa.”

“It was a disappointing end to a difficult weekend today. I didn’t have a good start because I was on the dirty side and I was struggling to find the pace to keep up with Petrov, so it would have been tough to make up much ground. We needed to have a good pit stop to stay ahead of Kubica but unfortunately we had the problem with the right rear wheel. It’s disappointing to have my first retirement of the season but these things happen and we will learn from the experience. After I heard that my tyre hit big Nige, one of my old Williams truckies, I was more concerned about my tyre than him! But seriously, it’s great that he doesn’t have any serious injures and I’m sorry for the incident. We’ll come back in Spa ready to do better.”

“Today was very disappointing for the team but sometimes these experiences happen and it is important that we learn from them. Nico and Michael struggled with their starts from the dirty side of the grid and it certainly cost Nico a place. The early safety car brought everyone in for their pit stops with our drivers due in quick succession. We had a problem with the right rear wheel during Nico’s stop and his car was sent without the wheel nut being properly fitted. We will have a thorough investigation into the incident and report our conclusions to the FIA. We are thankful that no serious harm was caused by the stray wheel and send our best wishes to the Williams mechanic who was unfortunately injured. Michael’s stop followed just under five seconds later and he was held whilst we sorted out the problem to ensure there was not a reoccurrence. This cost him a lot of track time at a crucial point and he came out down the field. Michael and Rubens had a tough battle in the closing laps which the stewards ultimately felt was too tough. We don’t necessarily agree with their decision but we do accept the penalty. It’s been a tough weekend but we will go away, lick our wounds and come back stronger at the next few races.”

“A very disappointing result for our team. Nico and Michael were not able to score points due to problems during their pit stops. Thankfully the mechanic who was hit by the tyre was quickly released from his check-up in the medical centre and our apologies to him and the Williams team. Our pace was not great but we should have scored points which ultimately, due to the above mentioned problems, we did not. We now have a well deserved summer break for our hard-working team and we will try to do better in Spa.”