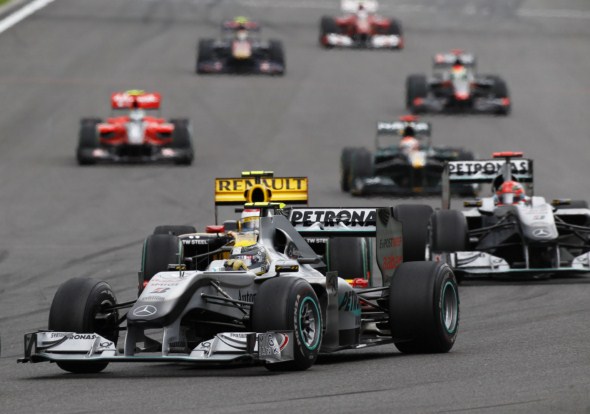 The mixed weather conditions benefitted the pair as they stayed out on their dry tyres before switching to intermediates on lap 34 when the heaviest rain shower of the afternoon arrived. With Michael in sixth position and Nico just two places behind, Nico had the better of the re-start under the safety car on lap 41, and made up two places overtaking Michael and Kobayashi.

“My rain set-up finally worked out towards the end there and I made up two places on the re-start. Sixth place today is ok and it really is the most that we could have hoped for from this weekend. Michael and I had a couple of battles out there which was fun. We respect each other and you just have to be careful and it all worked out ok. It was a good recovery today but we really need to continue to try and improve our car to have a stronger end to the season.”

“I am reasonably happy with today’s race, especially for the team. Coming where Nico and I started, I think we can all be pleased with the result, sixth and seventh places from 14th and 21st on the grid is not too bad, and it is important points for the Constructors’ Championship. For some reason, the number seven is somehow connected with me in Spa, so there is a further special feeling here. Without the weather being even crazier, we could not have achieved more today in my view. I ‘met’ Nico twice out on the track today. The first time, I had the better go in a nice racing duel and the second time was right after the re-start where I had to lift a little up into Eau Rouge due to the car in front which Nico used to fly past me. All in all, Spa turned out to be nearly as enjoyable as I had hoped for.” 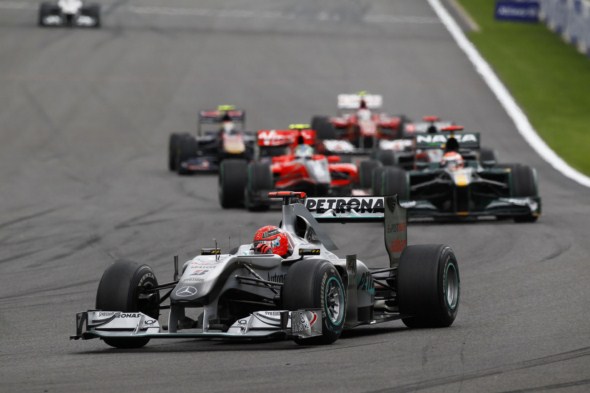 “We are obviously very pleased with the result today, and particularly with our strategy, which enabled us to achieve a strong points finish which looked difficult after qualifying. Nico and Michael both drove extremely well in testing conditions and kept us entertained on the pit wall although sometimes a little too entertained! But it was all done in good spirit and both drivers brought their cars home to give us as good a weekend as we could have hoped for. The result is very pleasing considering the relative performance of the car at the moment and a morale boost for the team.”

“Nico, Michael and the team all did a good job today. Starting from 14th position like Nico and coming home in sixth place is very impressive and even more impressive when you start in 21st place like Michael and are in seventh position at the finish line. We adapted to the typical Spa weather circumstances as best we could which was the baseline for scoring points with both cars from very difficult grid positions. It is obvious that we are still lacking speed but this was a much better result than in the previous two races where we didn’t perform as well as we did with Nico’s podium finish at Silverstone. We are now looking forward to Monza which will be a very special race due to the unique high-speed nature of this circuit. Thank you to everybody in the team for the recovery after qualifying yesterday. These points show that never giving up and being measured and focused are always the right things to do.”