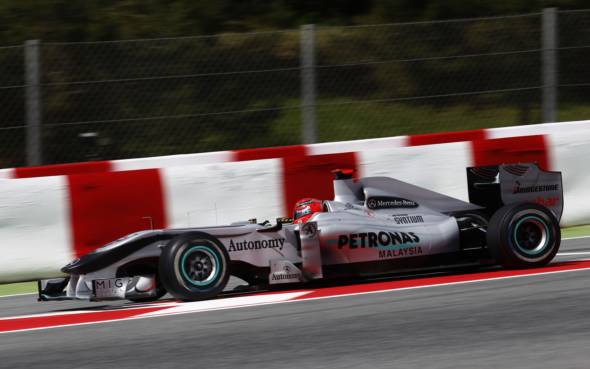 Qualifying for the Spanish Grand Prix at the Circuit de Catalunya in Barcelona saw the MERCEDES GP PETRONAS pair of Michael Schumacher and Nico Rosberg qualify in sixth and eighth positions respectively for Sunday’s race.

Michael and Nico progressed easily through Q1 with each driver using the prime tyres for two runs. Michael completed just one run on the options in Q2 for sixth place with Nico completing two runs and going through in tenth position.

Q3 saw both drivers complete two three-lap runs on the options to end the session with Michael in sixth place on the third row of the grid, and Nico in eighth position which will see him start directly behind his team-mate on row four.

“Today’s qualifying was straightforward in my view. We had a good car yesterday meaning that conditions were quite ideal for us in terms of balance and so on. Today admittedly, the car was not as perfect. It is little things that can trigger that change one way or the other, and whatever happened today just triggered us to fall over the edge towards the downside a little. Nevertheless, I feel a lot more comfortable driving the car that I have in my hands now. But there is a maximum that you can get out of it and that is what we have achieved today.”

“It’s been a difficult weekend for me and we need to look into the reasons for this and understand why. The changes that we have made with the car are obviously good and we have made a step forward but I haven’t really been able to use the improvements so far. Considering that I have found the car difficult to drive and haven’t had the best of set-ups, our performance today was acceptable but it’s not where I wanted to be fighting this weekend.”

“I am pleased with the performance of our drivers today with Michael and Nico doing a good job. Michael has continued the progress that we saw in the first three races whilst Nico hasn’t been completely happy with the car this weekend and that reflects in his position. I am comfortable that we have made progress but other teams have also moved forward so we have further work to do. I’m not happy with the overall performance, but I am confident that if we hadn’t done all of the work that we have, we would have been much further back. It’s evident that this has happened to the teams who have not made progress since the last race. There are some positive signs but we need to be faster.”

“We have certainly improved our car considerably since the beginning of the season but other teams have improved as well and the third and fourth rows are not where we hoped to start this important first race of the European season. Michael has done a very good job since the first lap here in Barcelona with Nico closing the gap to his team-mate from half a second yesterday to just over a tenth today. But of course sixth and eight places are not where we want to start a race from and we will be working very hard to improve that position as soon as possible.”