I would like to strongly recommend AGAINST Elite Cars Leasing residing at Rue de bertrange in Luxembourg.

This because i bought a car from them all well with the car but i got the car dealers Standard deal when they have “lost” the sparekey to the car and/or the servicebook.

We will send it to you as soon as we can.. blah blah”.

So I made sure this time to get this in writing, a legal binding contract, see the copy here. 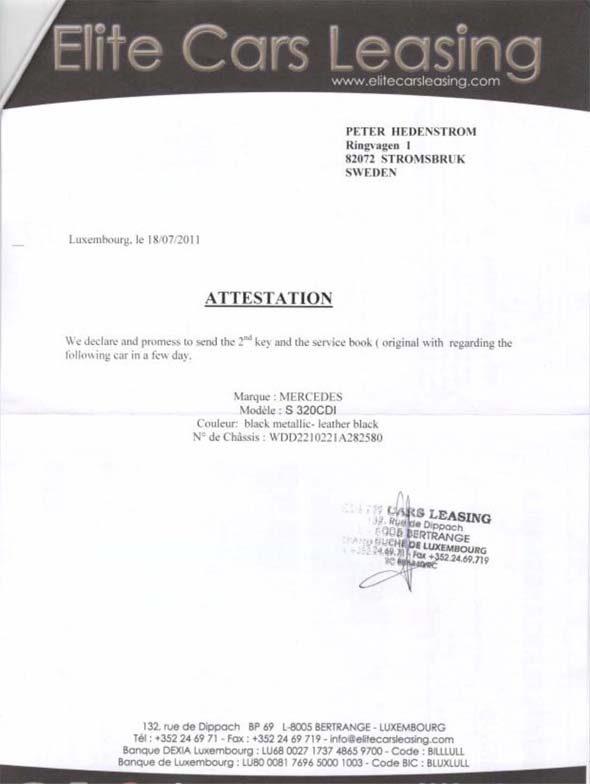 I will go after them legally eventually. I have a contact with a large legal firm here in sweden that will take on this case and follow it thru “Breach of contract” is the legal term.

The estimate from the law firm was scary on how much money a case like this could amount up to but they assured me as i had a signed legal contract and a very good documentation on how this has been managed i would win in court and the all costs would be legally debited to Elite Cars Leasing.

But first I will let them have ONE more last chance to redeem this mistake from their side.

If i get paid the money for the key and servicebook €362 as agreed via phone AND an extra €200  for all the time, effort and phonecalls i have had to put in to remind you I will take this page down. Otherwise i will make it visible in a Google search for your company.

My contact persons Dennis and Alain has always been very curteous and polite but have always made me promises of payment that has never happened.

(I have spoken to at least 5 different persons and they have all promised me that it will be paid.. some of the persons i have spoken to have hanged up in my ear as i spoke to them or put me on hold for a loooong time and never gotten back to me.

I have also spoken to a islam (moslem) beleiver at their place that EVEN swore to ALLAH that the invoice will be paid that day and that was a couple of weeks ago. ALLAH will get you for that lie!

2011 11 10
(Some) Money have been paid minus €100 for the servicebook that i didnt receive. They probably thought that i didnt deserve? that. And no extra money for all the hassle and extra expenses i had to go through til now.

They also said that i doesnt matter if had published this on the Internet and i could let it be there.

So i will let this rest online forever so they can take advantage of the BAD credit and poor insight they choose to spread to me as a customer.

2012 04 06
Today I got a phonecall from Alain at the company Elite cars leasing saýing to me “i want you to remove this satement from the Internet or i will let my lawyer take this on as a legal matter, I said go ahead as i see it and an attorney at law has explained to me this a breach of contract and there is no doubt of whos is at blame here.

He requested me to send him a mail letting him know what i was not happy with.

I have done so and told him in that mail;
I will be forgetting this ever happened and remove this article from the Internet if i got paid €300 this for my effort, all the calls i had to make and the missing servicebook which he always promised me.

This is not an attempt of blackmail in no way what so ever, all I have done is state my personal opinion of this matter and published a signed contract in which they are in breach of.

Please feel free to contact them and tell them what you think of this behavior from their side!

Readers vote for "The most beautiful cars of 2011"